Jump to Latest Follow
I've been sitting with a bag of parts for almost a year and a half, but due to work travel and family constraints, have not had time to undertake installing them. So this morning my son and I finally got around to getting it installed, and the results are outstanding. This will work on any Titan with an AUX plug on the OEM head unit. Mine is a 2011 Pro4X with the RF system, but any OEM head unit with a separate AUX jack will work. Time to install was pretty reasonable, taking us about 2hrs, start to finish, including a little time making sure we knew which wires were which on the AUX harness and to power/ground the new Bluetooth setup. Here's a picture of the parts I used: 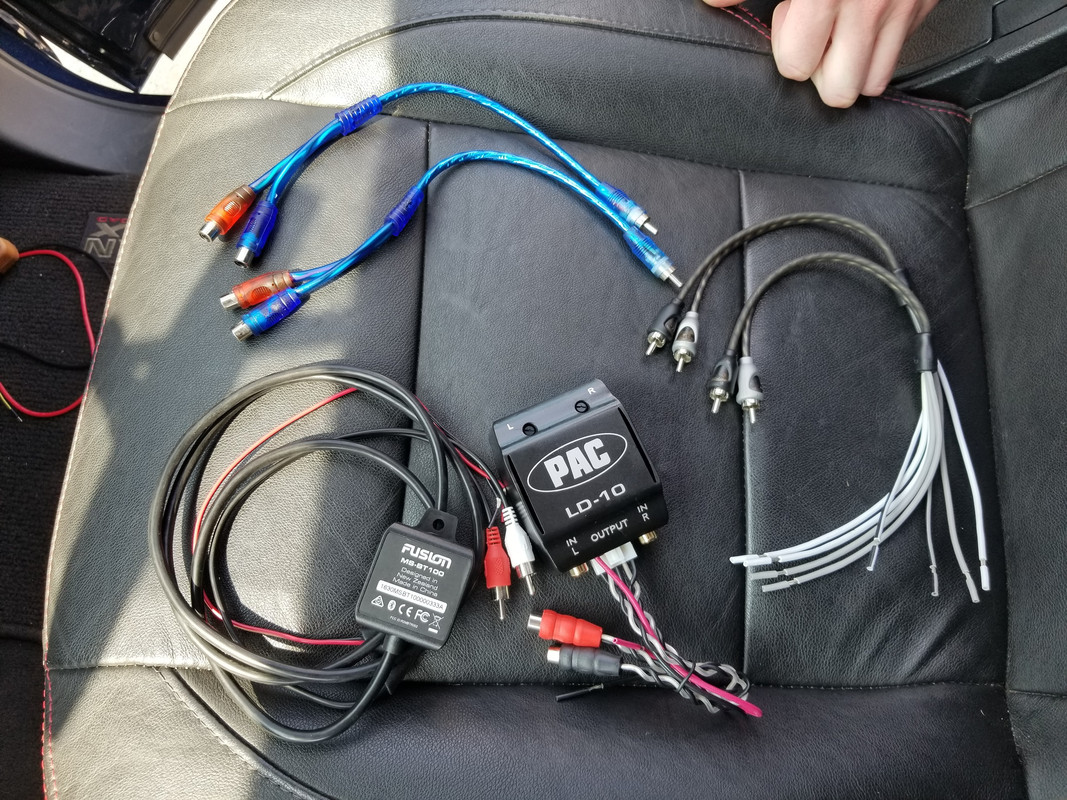 and links to the important ones:

What I did was piggy back off of the ideas of a couple of folks here on the forums, from a long ways back. This thread was my initial inspiration, and provided the basic knowledge of how the wiring was run, and that this was technically feasible. I will note that my AUX wiring harness was not Red/Black/Brown, but rather Red/Black/White, which was made only more confusing by the fact that Nissan wired up the red wire to the left channel, and the white wire to the right channel, which is backward of conventional color designations. Since all this is hidden anyway, it didn't matter as soon as we deciphered the AUX jack wiring and knew what to solder to what.

Ready to start, having identified where we were going to stash all the new stuff inside the dash. There's plenty of room under the head unit, between the climate controls and the air plenum.


We cut the AUX harness about 1" from the jack, behind the facia for the stereo and climate control. 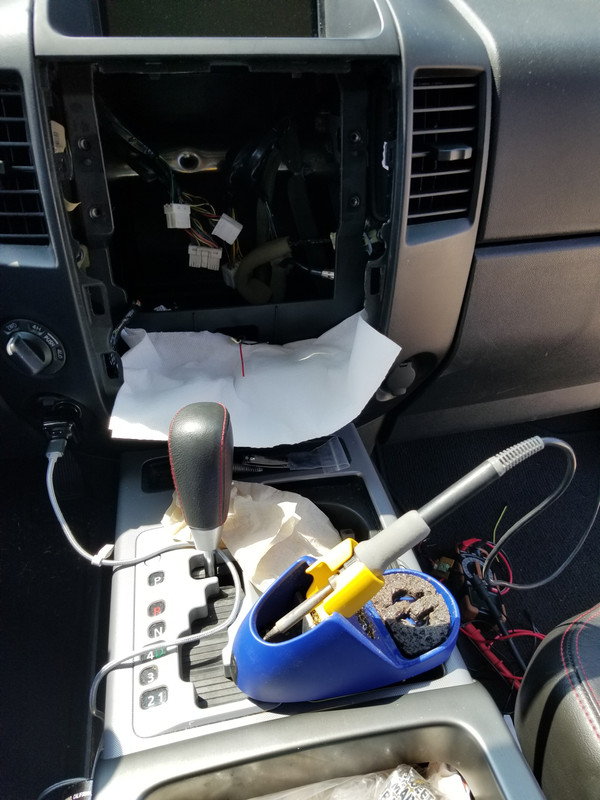 My son is an electronics whiz, so he has a very nice soldering station, which we used to our advantage. We soldered male RCA jack leads to both the AUX jack side of the newly severed harness, and to the truck side of the harness, finishing with heat shrink to keep it all clean and isolated. I wanted to solder everything, but my son said it was too tight inside the dash to solder the power and ground wiring. For that, we used wire nuts to tie the red power leads from the Bluetooth module and in-line adjustable amp together with a lead which was tapped into the violet colored switched radio power lead, which keeps the new components powered in step with the radio. 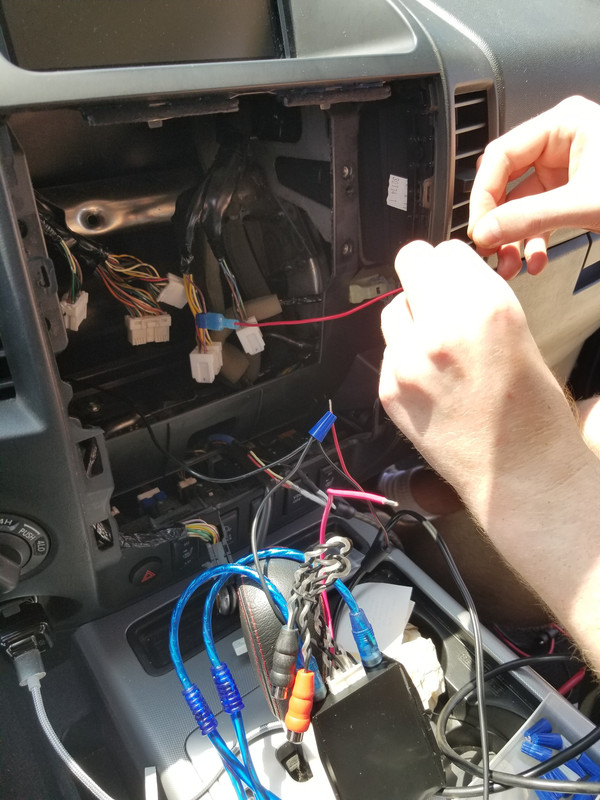 We grounded both components via wire nut to a lead we bolted through an existing hole in an underdash brace, using a soldered-on ring terminal and a spare bolt/nut/lock washer from the tool bench. 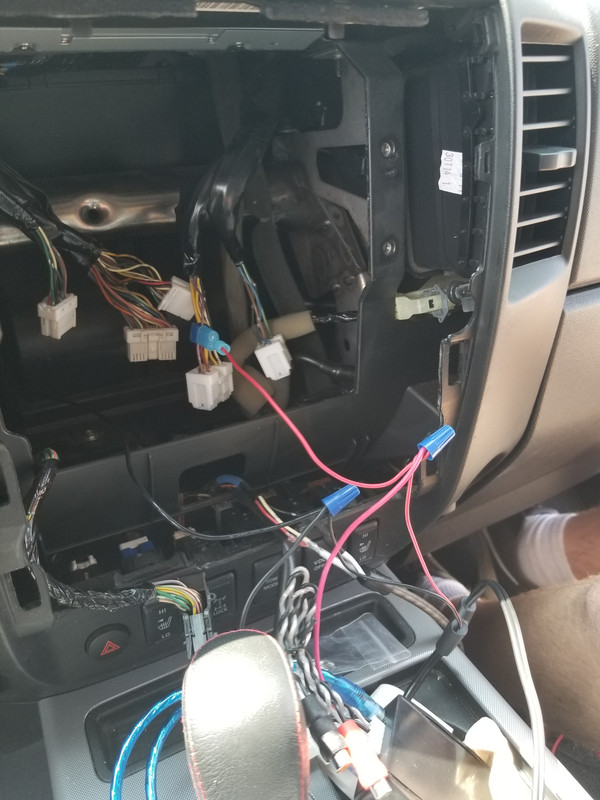 Here's where it gets a little tricky, but I'll try to explain it simply. What we did was use a pair of RCA splitters, and feed the Bluetooth module (which came with male RCA outputs) and the newly added male RCA harness on the original AUX jack, into the PAC LD-10 in-line amplifier/ground loop isolator. The LD-10 has female RCA outputs, which we connected to the male RCA harness we soldered to the truck side of the AUX harness. 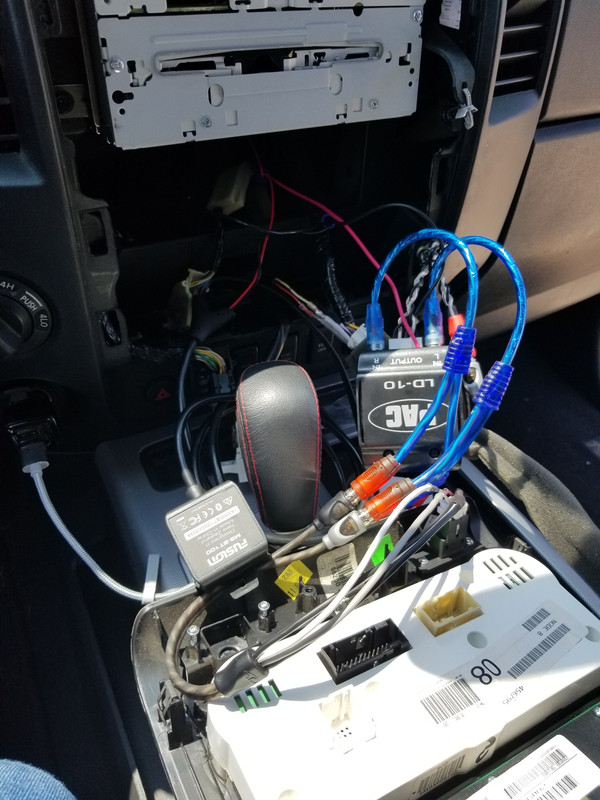 So we have both the Bluetooth module and the OEM AUX jack routed through this LD-10 amp/noise isolator, which feeds the AUX input for the RF head unit. The only part left was to reinstall the head unit, turn it on, and see if it worked. I'm happy to report that everything worked as planned, and the only thing we had to do was adjust the setting on each channel of the LD-10 to get the signal from the Bluetooth leveled with the radio and CD sound signals. Once we finished that, we zip tied all the loose cabling into tight loops, and carefully set it into the space between the facia and the air conditioning plenum, and replaced the faceplate.

I'm thrilled with the outcome, and when I want to listen to streamed music, I just connect to the Bluetooth module, hit play on my phone, and AUX on the head unit. It's as clear and high fidelity as the CD player, and sounds better than the FM Stereo. The whole install was pretty easy and didn't take too long. One tip - unscrew the airbag light from the facia, rather than disconnect the plug for it. It avoids any resetting issues after reassembly.

Oh, and my Samsung Galaxy S8+ blows the doors off the truck with music now. And thankfully, the OEM phone bluetooth still functions properly, and pauses the music audio when a call comes in. Perfect integration! Total cost was just about $100, but would have been cheaper if I hadn't wanted to use the nicer RCA pigtails, and had just cut up old cables I'm sure I have laying around somewhere. But this was clean and easy, which I like. If I ever sell the truck, I'll likely leave it in there for the new owner, but I could pull it and just connect the AUX harness with a set of barrel connectors to return everything to factory configuration.

Reactions: Blownbayou, danman and Quartz
Save Share
1 - 18 of 18 Posts

Joined Aug 31, 2011
·
5,367 Posts
I'm pretty pleased with the cost/benefit on this one. I'm only half a day into it, but so far it works beautifully. I'm about to take my daughter to ballet, and will be testing how many bluetooth connections my phone will handle, as I'm going to connect for music and phone, but also try to use Torque via my bluetooth ELM327 adapter. If all three will connect, I'll be surprised, as I think the limit is two, but we'll see.

I haven't confirmed the AUX jack still works, so that's on my to-do list, but if I had to sacrifice one, that's the one I don't use much. It "should" still work, so I will update and confirm or deny. If anything changes over the next few months with the install, I'll update that as well, but I'm loving it right now.

Joined Aug 31, 2011
·
5,367 Posts
I can confirm the new setup works with the phone connected to the OEM Hands-free Bluetooth connection, the new Fusion music streaming Bluetooth connection, and Torque reading data from the ELM327 adapter, all at the same time. So apparently, the Galaxy S8+ will connect to 3 Bluetooth sources simultaneously, as long as the three sources don't overlap in terms of media, phone, or other data, I'm guessing. I'm going to test the AUX jack as soon as I find a suitable 3.5mm cord around here somewhere.

Joined Apr 24, 2008
·
599 Posts
Pics are visible now.... Waaaay different radio than what I have unfortunately. I have the RF unit with the 4" color screen and the aux on the radio itself. I do have an empty harness plug in on the back of my radio that supposed to go to the aux mounted in the center console (if I had that aux). Bet I can get that harness and do EXACTLY what you did.

BT module out to Booster
Booster out to female RCA to 3.5mm Female
3.5MM female to 3.5MM male
3.5MM male to AUX on the front of the radio

This should work...... I have a 90 degree flat 3.5MM cord that I bought to plug into the radio and run it into the dash (behind the molding).

Question is..... Do I need the booster??? Since I am not splicing into any harnesses and running directly to the aux port. If I need it for sound quality, I will get it.

Thanks for the time on this

Joined Aug 31, 2011
·
5,367 Posts
I installed the amplifier because my aux input was significantly lower volume than Radio/CD functions when set at the same level. I used the amp to even it out a bit.

I appreciate your how to and replies on this.....

dubyam said:
I installed the amplifier because my aux input was significantly lower volume than Radio/CD functions when set at the same level. I used the amp to even it out a bit.
Click to expand...

Just hit me..... My head unit has a separate gain for the AUX input in the menu!!!! I really do not need the amp, so I just cancelled it. Funny how things just hit you out of the blue!!!!

Joined Apr 24, 2008
·
599 Posts
Little pre wire action... ground ready for the wire, power running to a 12v ignition source via fuse tap, and a preview of the aux wire plugged in. Will be connected and bluetooth ready tomorrow evening!!! Thanks again for the direction and research on this.

Joined Apr 24, 2008
·
599 Posts
Installed yesterday and it is the same sound quality as a hard wire into the aux..... The only negative is that the unit is a "passive" BT dongle. This means the only way it will connect automatically to your phone/device if it is the only thing on your BT list. If you have other devices listed, you have to connect manually. If this is not correct, please shed some light on how to connect automatically.

Anyways..... It is still better than having a phone mounted in front of my display!!!

Edit: The stock BT connects auto and states phone and when I connect the dongle it states media.... Love my S7 Edge

Joined Aug 31, 2011
·
5,367 Posts
Yes, its passive. I did that on purpose, as I didn't want the automatic bluetooth to override things on my phone. The good news is, if I ever decide to change it, two wire nuts and two RCA plugs later, and I'm swapped out to an active module. I like the passive for now, though.

dubyam said:
Yes, its passive. I did that on purpose, as I didn't want the automatic bluetooth to override things on my phone. The good news is, if I ever decide to change it, two wire nuts and two RVA plugs later, and I'm swapped out to an active module. I like the passive for now, though.
Click to expand...

This is an older thread, you may not receive a response, and could be reviving an old thread. Please consider creating a new thread.